Home » Blog » The Culpeper Honors Veterans with Flags for Heroes

Dozens gathered at The Culpeper on November 9 for the Flags for Heroes event, hosted by the Rotary Club of Culpeper, to thank, honor and remember all veterans. The service organization honored nearly 200 veterans, service members, first responders and front lines workers with a U.S. flag celebrating service and sacrifice. Club members placed the flags along James Madison Highway through a partnership with The Culpeper.

“A hero faces adversity with grace and courage while helping someone in a moment of weakness,” said Rotarian and The Culpeper’s Director of Marketing Rose Wallace. “Flags for Heroes is also for our residents who endured a pandemic and their families who could not see them in person. It’s for the first responders and frontline medical workers walking alongside the community,” she said. “It’s for the teachers and parents, the grocery and restaurant workers, social workers, bus drivers, grandparents, aunts and uncles, utility crews and sanitation employees who showed up to work every day.”

The commemorative event raised more than $10,000 for the Rotary Club of Culpeper. Wallace said the proceeds went to Special Love to fund Camp Fantastic, a summer camp for children battling cancer. Members of the club volunteer at the camp every summer. Proceeds also went towards scholarships for local high school students. Additionally, The Culpeper’s team donated the event space, materials and team members’ time totaling $6,000. 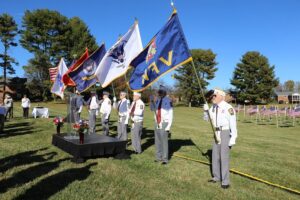 This story was originally published in LifeSpire of Virginia’s 2021 Annual Report. The full digital magazine is available online.

Explore all the great things our community offers.

To learn more about living or working at The Culpeper or to schedule a tour of our beautiful Life Plan Community, please fill out the request form.

Front lobby of The Culpeper. The front desk is staffed from 8 a.m. to 8 p.m. every day.

This room is used primarily by residents hosting private parties or families celebrating birthdays, anniversaries or other special occasions.

This alternative dining spot offers both grab-and-go and made-to-order options. Open all day with flexible hours.

All residences in The Culpeper are private with a private bathroom and feature individual thermostats, generous closets and handy kitchenettes.

The Memory Care neighborhoods are connected by an easily accessible, beautifully landscaped courtyard.

Each neighborhood will feature its own kitchen, living area, spas, activity rooms and comfortable seating.

This neighborhood is for those recovering from an injury or illness on a short-term basis. All rooms are private with private bathrooms.

The rehab room contains the latest equipment and a professional team of therapists to help you recover from your injury or illness as quickly as possible.

Get all fixed up in our new salon featuring haircuts, color, permanents, and much more. Also, includes manicure services.

The community has designated activity rooms at all levels of care. The activity room on the first floor will host a multitude of daily activities and programs for resident and guest enjoyment.

The Culpeper's new chapel will feature five stained-glass windows from our original historic building and host a variety of religious services and vespers.